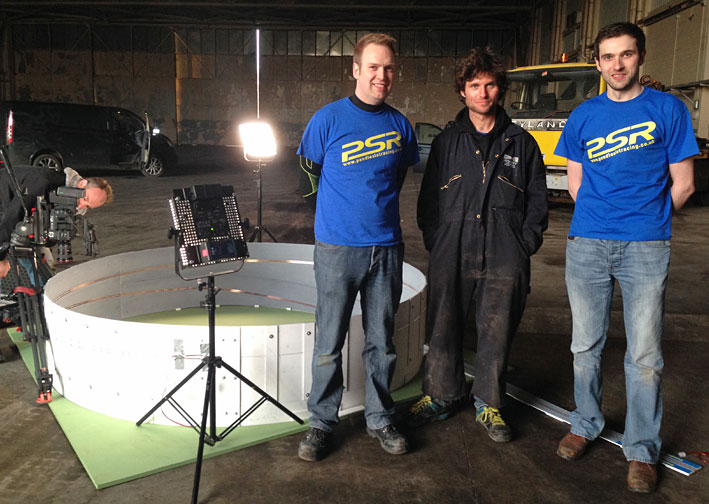 Pendle Slot Racing were contacted in February 2015 by UK Production Company North One Television and asked about the possibility of recreating a Scalextric scale replica of the worlds biggest 'Wall of Death'. Potentially for use as a pre-show feature in the Channel 4 'Speed with Guy Martin' programme.

The actual show would be aired live on channel 4, with TT motorbike ace Guy Martin attempting a world speed record, to ride over 80mph on an oversized version of the wall of death.

Friday 6th March 2015 was the date set for the filming shoot. We made a start on the project on February 24th with basic ideas of how we could go about making the track. We had to build a 1:32 scale version of the wall of death to be used and it soon became clear that using Scalextric type track was not going to work. 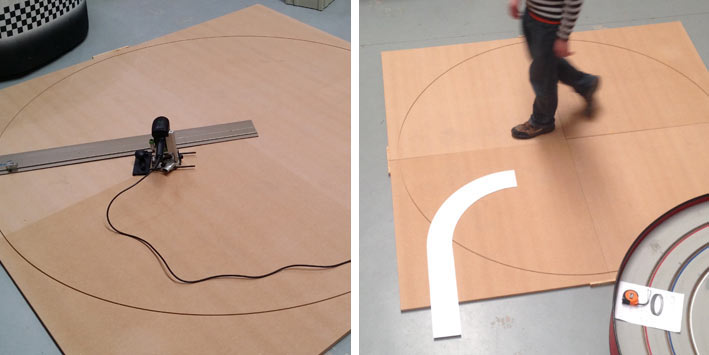 For the base we decided to use MDF wood and rout out a circle to position the upright wall. 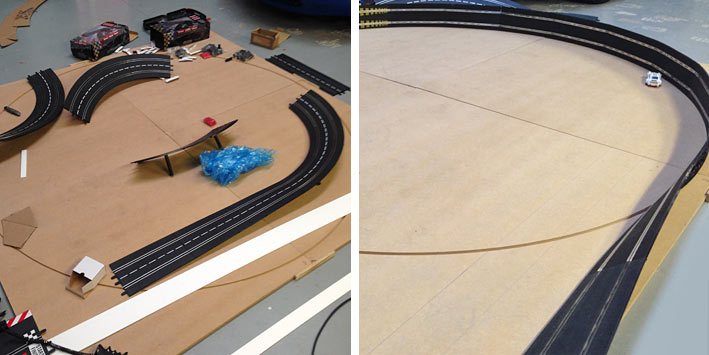 Before we started building we set up a semi circle banked Carrera track just to test and get an idea of the speed needed. 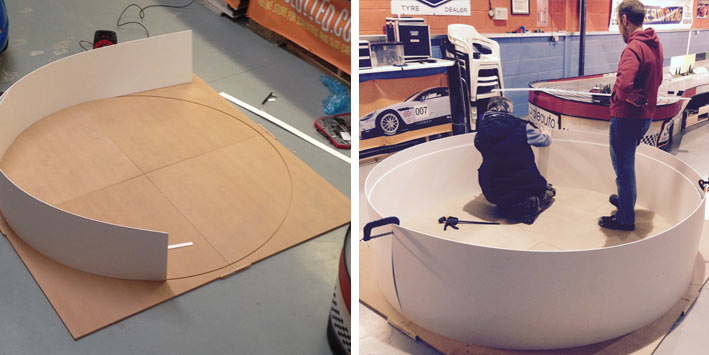 Our thoughts went towards using plastic foam board for the sides, as it would be flexible enough to make a cylinder and we could then rout a slot through and use copper tape for the rails. 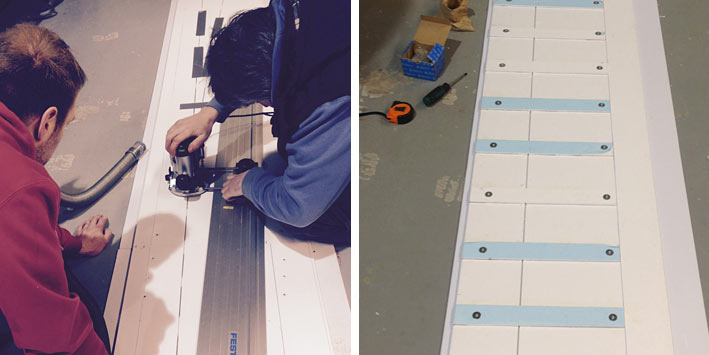 Monday 2nd March we worked late into the night to get the shape of the track constructed. Our initial idea was to have a double skin wall glued together with a slot routed through the inside board. The outer boards were causing us problems lining up and we began to doubt if we had enough time to finish the job. We needed a rethink.

Tuesday 3rd March we decided to use a single board with supporting uprights rivited the the outside, we then routed the slot. This seemed to work well, the single board had enough flex to make the circular shape and the supporting pieces helped keep the board in an upright position. 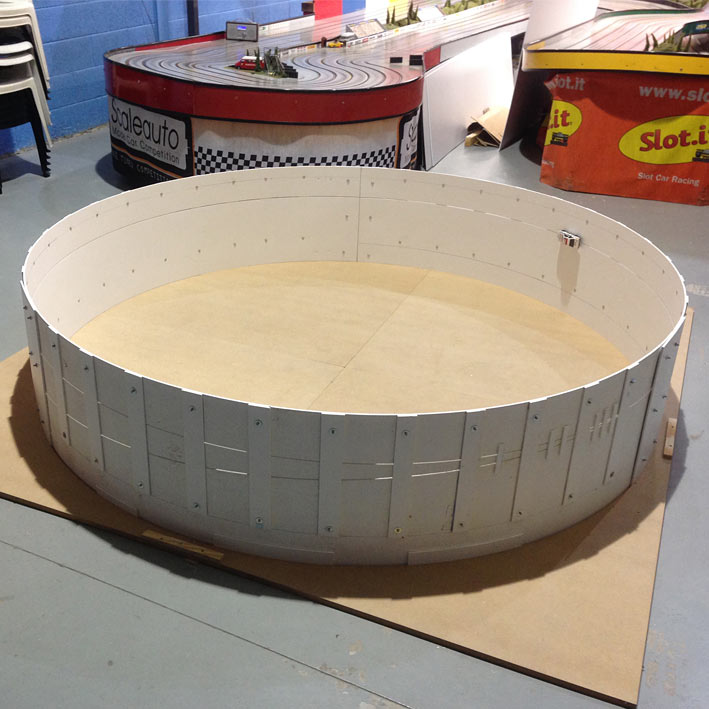 Wednesday 4th March was the next big job, to make the run up track and curved ramp link seamlessly into the wall. No time for CAD drawings here, just pieces of papercut to shape to give us design ideas. 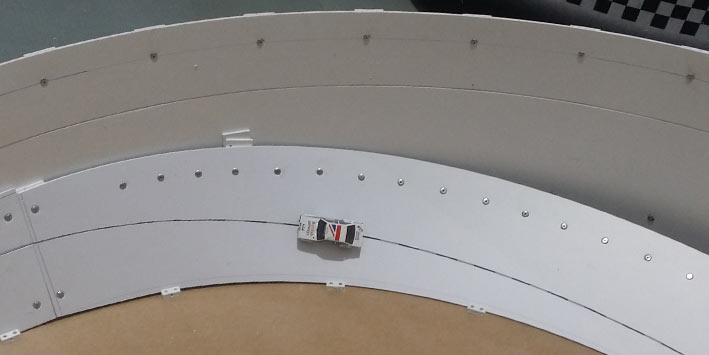 Thursday 5th March the day before the shoot. The ramp was done and looked to fit really well but we still needed to tape the track, wire and test if it actually worked. 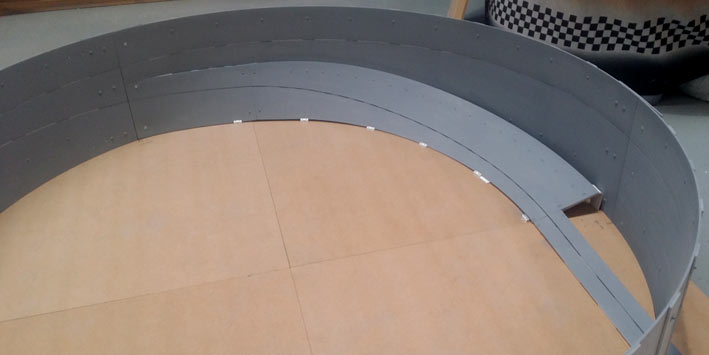 Would it work? We were confident it would, but our main concern was being able to carry enough speed from the ground and smoothly up the banking onto the wall. 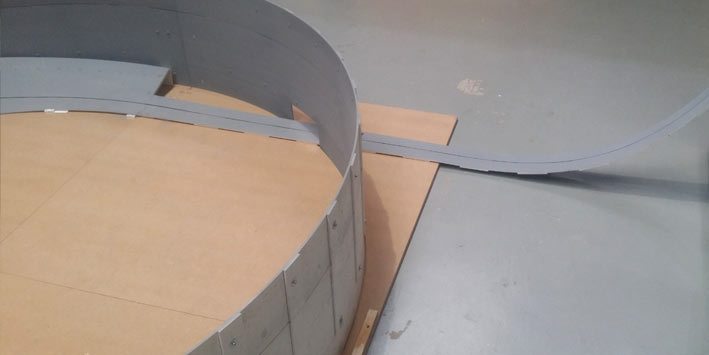 Once the track was assembled, copper taped and wired we tested the track. 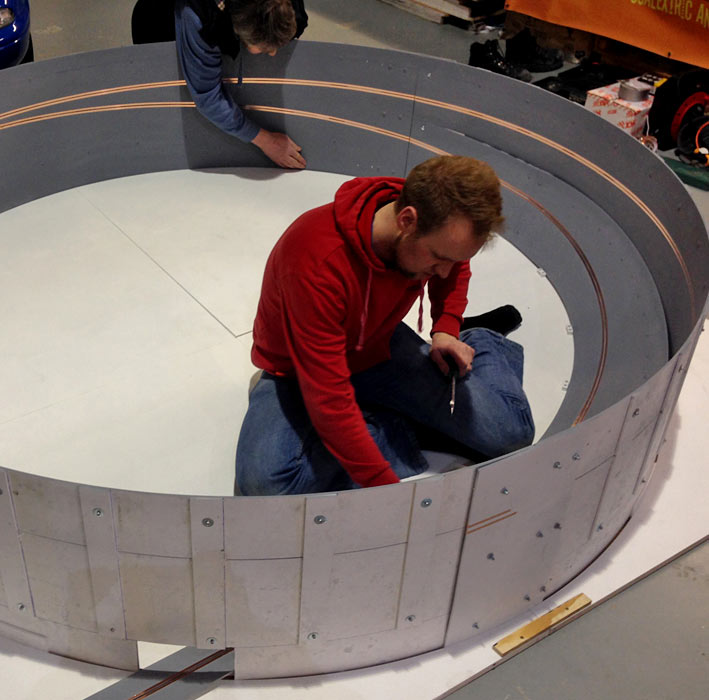 We first used a battered old SCX Ford Escort, the car wasn't fast enough. Next we tried an NSR Porsche 917 and  to our amazement it worked first time. We did try to get a bike working but time was against us. 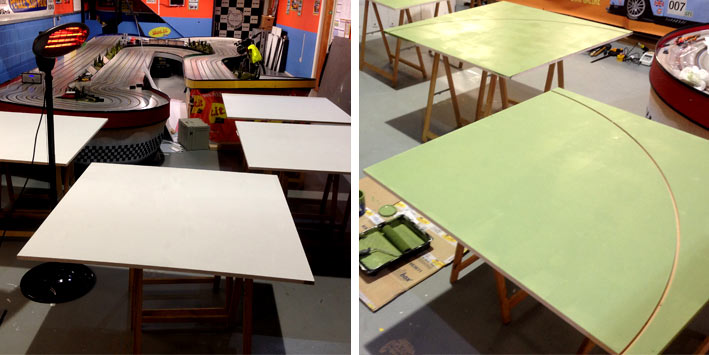 The night before the shoot we painted the MDF boards green. The final job was at 6am on Friday 6th March as we re-wired the track before we set off.

We arrived midday in Lincolnshire at a large aircraft hanger, ready for our 2pm filming slot. 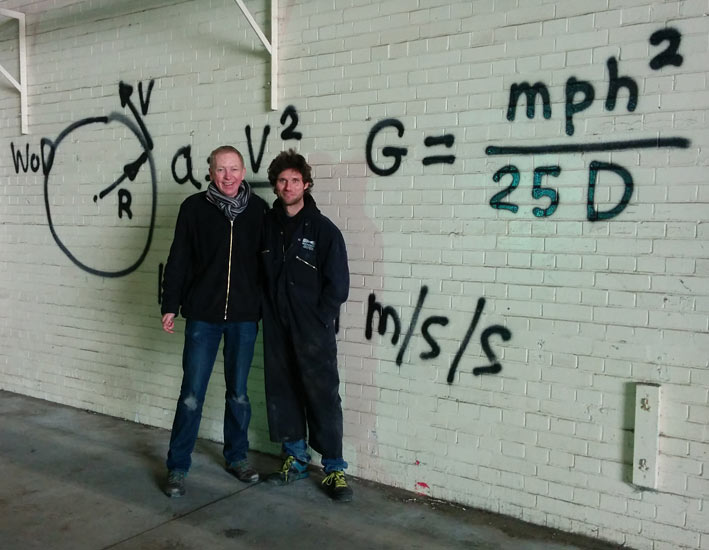 After a warm welcome by Sarah and Tom from North One TV, we was told that we couldn't set up the track until most of the other filming had taken place, so we just watched with interest at all the on going activities. 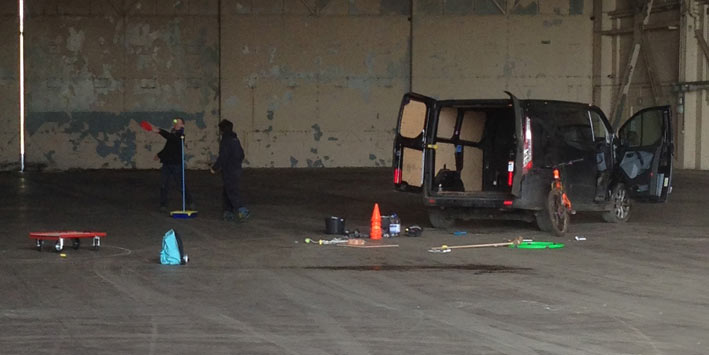 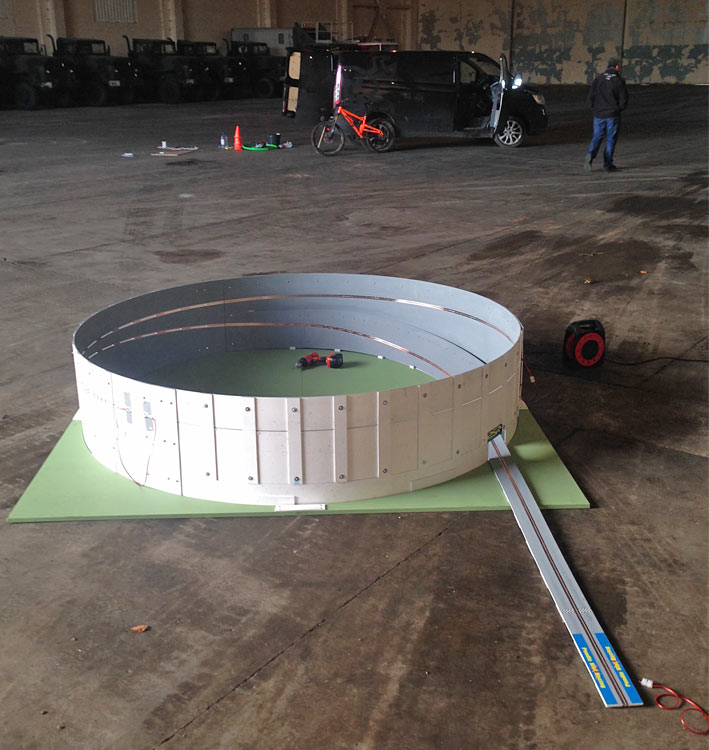 It was time to setup our track, we knew it worked the night before but we since rewired it in the morning. It was a nerve wracking moment 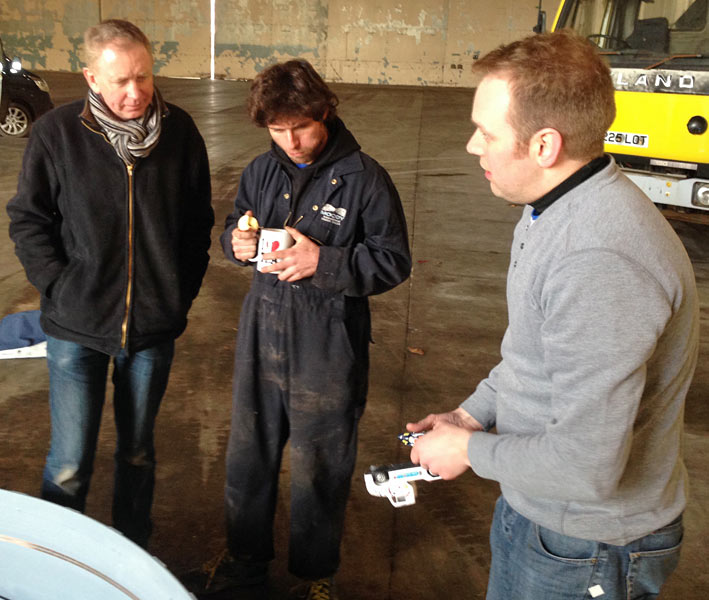 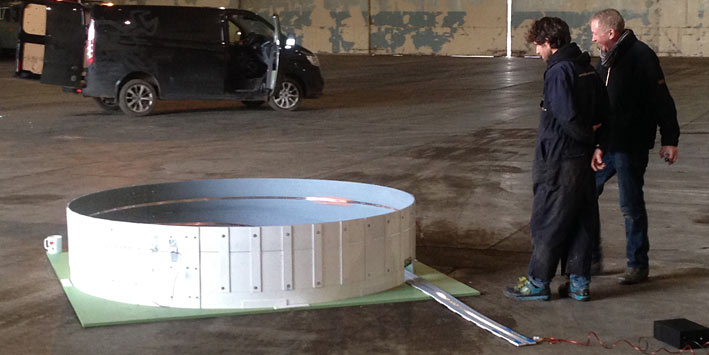 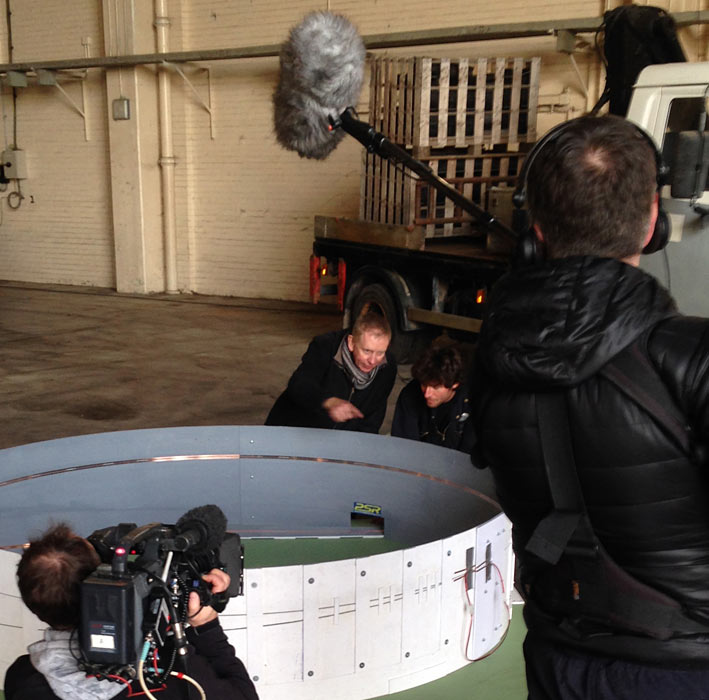 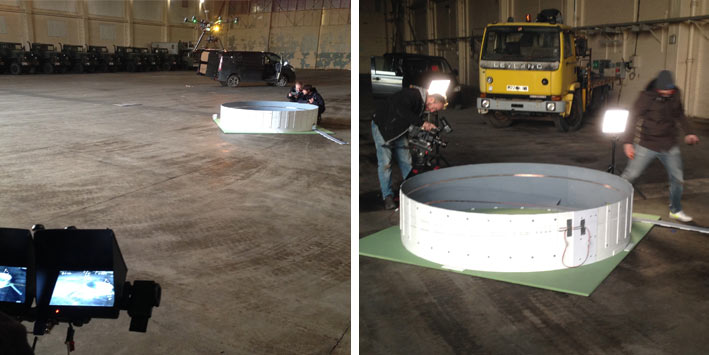 Various shots were also being taken inside and out using a custom built Aerial drone. 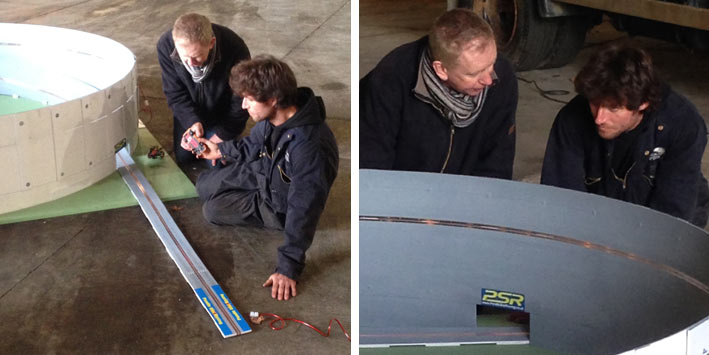 The track worked successfully and after Guy and the Proffessor had finished playing it was time to pack up and set off home. 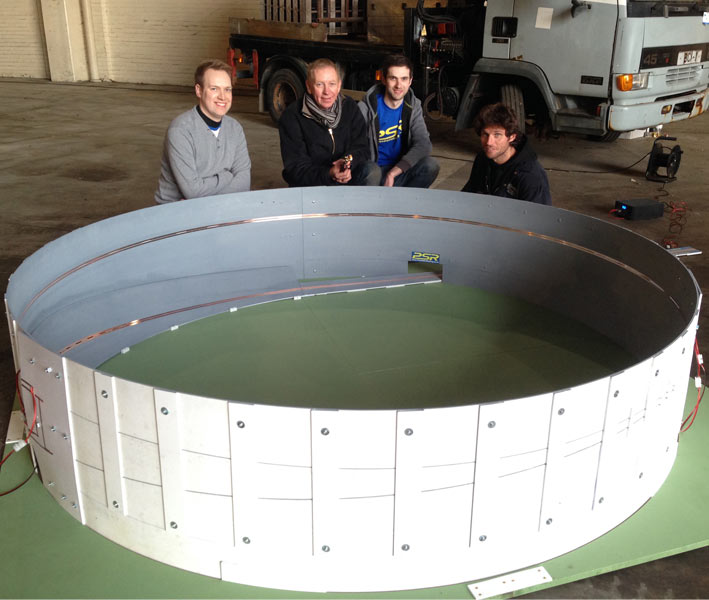 Watch our replica track in action

History of the 'Wall of Death'

The ‘Wall of Death’ is an epic stunt that involves riding a motorcycle around a vertical wall at high speeds.

This spectacle dates back to the early 1900s and became a popular staple of travelling fairgrounds across America and Britain.

Generally the Wall of Death is a barrel-shaped wooden cylinder that can range from around 6 to 11 metres in diameter.

Inside the dome a rider will usually perform stunts using a motorcycle which riding around the vertical wall using the centripetal force to keep both the bike and rider in place.

Preparation for the record attempt

Guy, a professional motorcycle racer, will need to learn to ride along a vertical wall at high speed while training his brain to cope with intense motion sickness. He’ll also have to handle extreme G-forces usually only experienced by seasoned fighter pilots.

Guy will be training with the legendary Ken Fox’s Hell Riders – the UK’s No. 1 Wall of Death troupe. The Fox family has been touring and entertaining since the 1920's and Ken Fox is recognised as one of the world's leading Wall of Death riders.

Guy will then graduate to riding the largest ever Wall of Death. It will span a massive 40 metres in diameter – over four times larger than a traditional fairground wall.

To allow Guy to train day and night, rain or shine, in the run up to his record attempt, this huge structure has been built in an aircraft hangar close to Guy’s home.

Finally, almost two years of graft will all come down to one spectacular night of live TV, when Guy attempts to ride at over 80mph on this vertical wall.

Guy Martin says: “I’m not a television person, but I think this could be the greatest television ever … really … it’s the wall of death - live! I’m getting nervous about this now.” 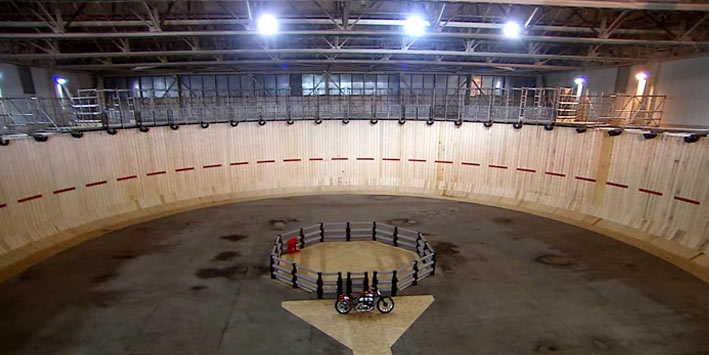 Guy and his support team of scientists and engineers plan to revive this stunt in epic fashion by attempting to set a Wall of Death world speed record.

The proposed structure will be made using shipping containers stood on there end in an upright position and aligned side by side in a huge circle. The inside of the circle will then be lined in wood to create the track surface for Guy Martin and his bike to perform the stunt at a secret location.

For Guy Martin to attempt and complete this world record attempt he will need to approach speeds of over 80mph pulling over 8g continually during the attempt on the largest Wall of Death the world has ever Seen!