2018 marks the 60th anniversary of Motors editor Christopher Jennings' historic drive in Jaguar E1A, a testbed vehicle for a new production car that had been developed from the Le Mans winning D-Type, incorporating numerous improvements including superior aerodynamics. 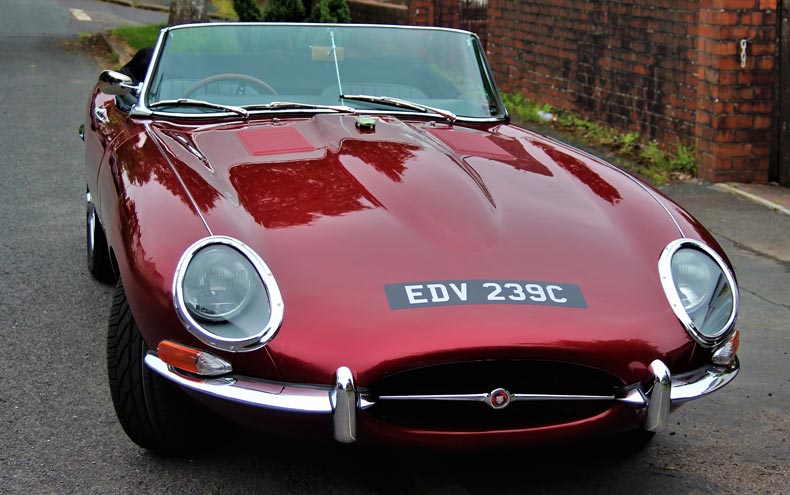 Sir William Lyons personally came to Jennings about his test routes across Wales, one he'd used for other vehicle tests, wondering if he would be interested in timing the new E1A Jaguar over this course. Jennings agreed to evaluate the prototype E-Type Jaguar and compare it with other fast cars on his test routes from Carmarthen to Brecon and Carmarthen to Devil's Bridge. 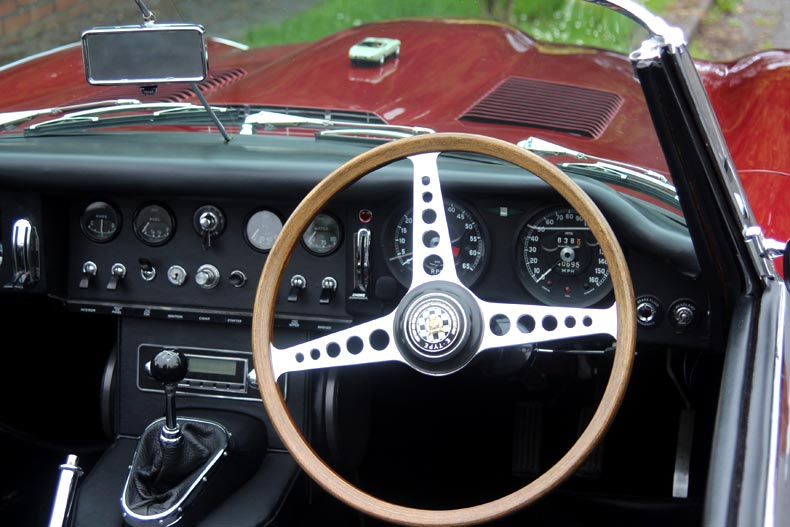 As history now records, Christopher Jennings set a record time of 43 minutes over the route, at an average speed of 67.7 mph between Brecon and Carmarthen, and an average speed of 50 mph between Carmarthen and Devil's Bridge, reporting back to Jaguar that E1A set new standards for a sports car, and was a world beater, with projected top speed of 150mph. His forecast was vindicated, with the E-type Jaguar going on sale in 1961 and causing a sensation.

On July the 7th, a group of E-Types and C-Type Jaguars retraced the historic drive between Carmarthen and Devil's Bridge. 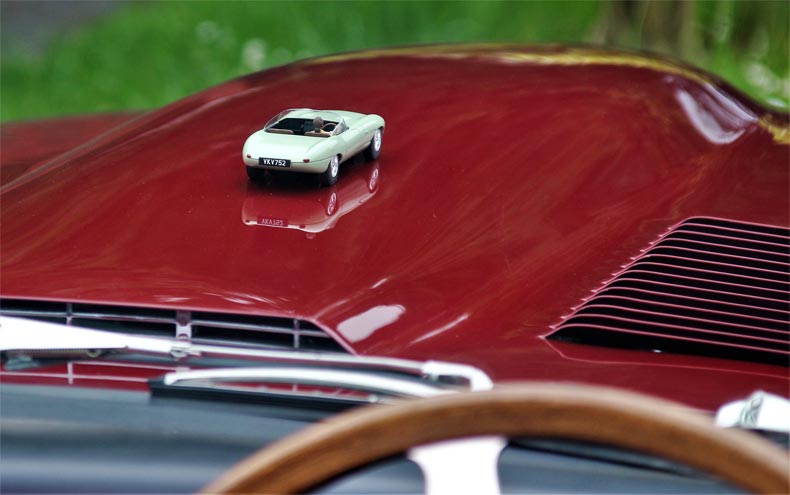 To mark this occasion Pendle Slot racing have created a world first, with a beautiful scale model of Jaguar E1A. This is the first model to be produced of this game-changing car in this scale. These models were made available to drivers on the event, along with a beautiful convertible E-Type Jaguar slot car of which only 75 will be made.

Both models are shown here on the bonnet of Martyn Jones' series 1 E-Type. 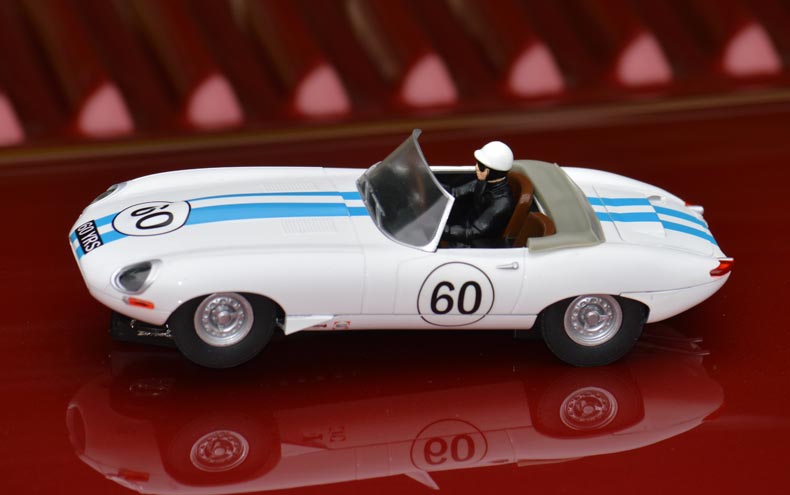 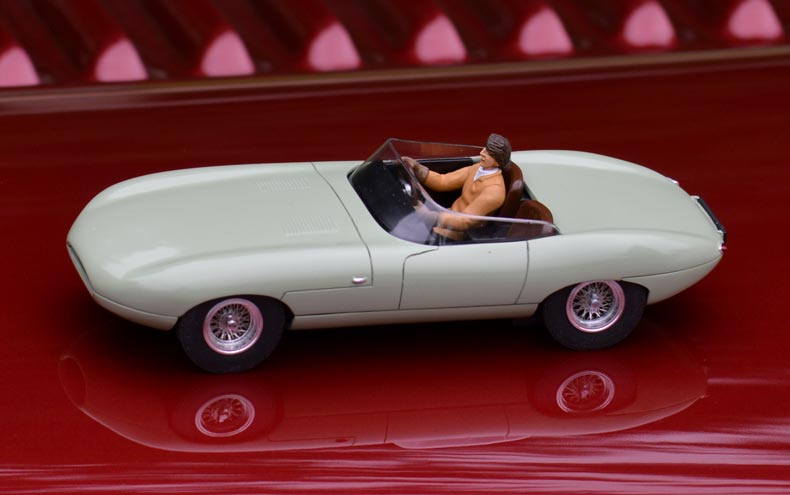 The second E1A anniversary run took place on the 7th of July, in weather which was more suited to the Mediterranean than Wales, with perfect warm sunshine all day long.

The day began by meeting up with William Heynes, grandson of the famed Jaguar Chief Engineer, who was driving a beautiful, lovingly preserved XK120 FHC, 777 AHX. This vehicle is quite well known; a former competitor in the famed Monte Carlo rally, when it was driven by Don Delling, a former US Army officer, who later drove for Volvo. Delling competed in the Monte Carlo twice, in 1955 and 1956, though a listing in the October 1980 edition of Jaguar Drive magazine records it as still being owned by the American, a quarter century later. 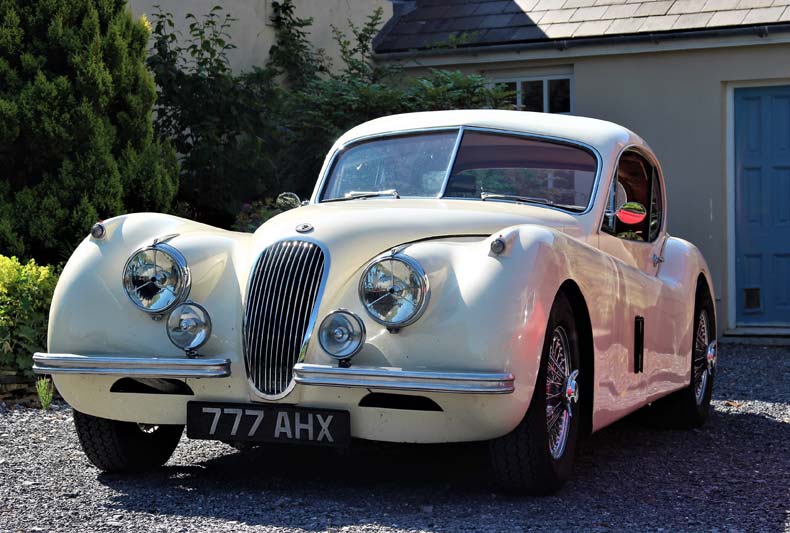 To the best of my knowledge, 777 AHX ran in the top five European rallies of the period for some years; Monte Carlo, Liege, Tulip, Sinestre Italy and the Alpine Rally. Paul Skilleter records the car as having been the last XK120 to win the GT section of the Sinestre rally, in 1958. To the modern day, the car has been restored with upgraded brakes and steering, but is otherwise fairly original.

Having met up with the driver of this gorgeous, historic car, we travelled together from Cowbridge to Carmarthen, where we met up with the other entrants in a location that admittedly was short on a certain grandeur - a supermarket car park. Nonetheless, the splendour of the vehicles more than made up for the scenery, and after a very enjoyable hour spent talking with the entrants, we set off. 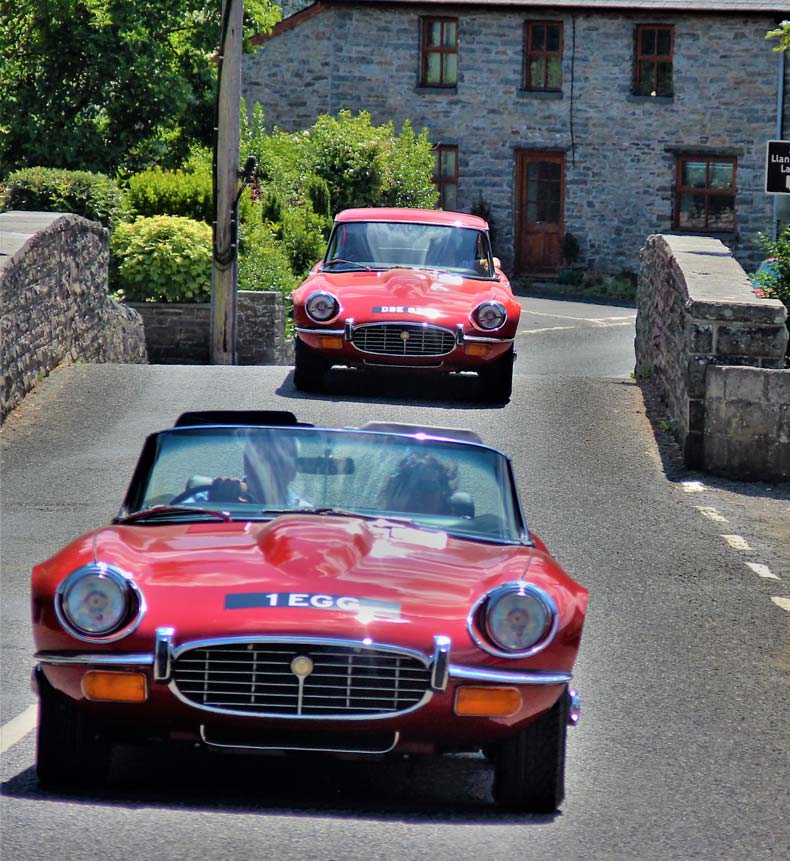 Travelling in convoy, it didn't take long to reach the official beginning of the run, at the house where Christopher Jennings once lived. There, we were greeted warmly by Edwin Atkinson, who provided tea and biscuits, and in general, made us extremely welcome. William Heynes produced the most wonderful book of original design drawings of E1A, which spurred considerable interest and is an absolute experience to peruse. Nonetheless, despite the delights of the spot, we girded our loins and began the run proper. 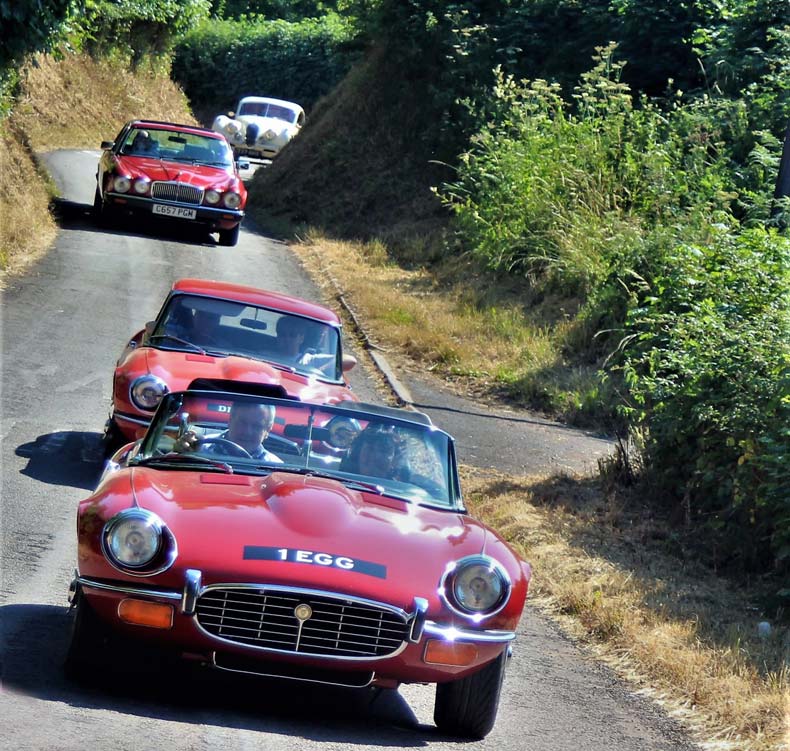 Driving the camera car out of Gellideg with a convoy of Jaguars behind me, I found myself moved by the echo of the past, musing on what Christopher Jennings would have seen as he left from the very same place in 1958 to complete his historic drive in E1A. I particularly enjoyed heading down the A40 bypass, driving alongside Martyn Jones in his series 1 E-Type while our event photographer leant perilously out of the window to capture the car in full motion - her bravery was a sight to behold, reminding me of Richard Snow last year who risked life and limb hanging out of a C-Type under similar circumstances.

The run proceeded wonderfully, under the glorious sunshine. We missed a turning at Devil's Bridge - my fault completely - but ended up following Martin Lane, of Lanes Cars, back to the railway station in Devil's Bridge though some of the most breathtaking countryside I have ever seen. 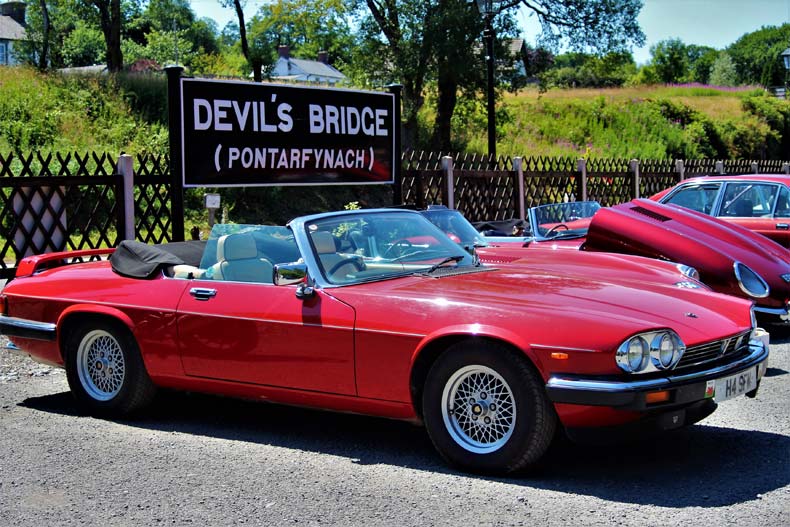 After leaving Devil's Bridge, we travelled to New Quay, and parked on the wonderful stone pier - this was only possible due to the huge effort put in by Martyn Jones, who had worked tirelessly to get the correct permits. Lunch was served in the Yacht Club, and everybody had a wonderful time. I can't wait for next year. 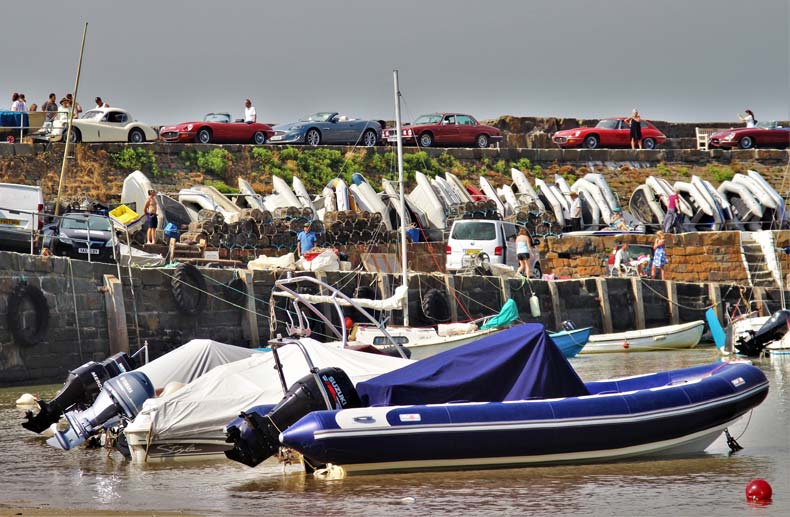 The 2018 E1A run is dedicated to William Munger Heynes CBE, without whom Jaguar would not scaled the heights they did in the 50s and 60s.

Heynes was born in Leamington Spa in 1904, just after the birth of the fledgling British motor industry, and would go on to play a major role in the success of both the British car industry, and Jaguar in particular. His career began at Humber, where his natural talent and gift for design rapidly propelled him to the head of the Humber Technical Development department.

Heynes' gift for engine development drew the attention of William Lyons, the chairman and co-founder of SS Cars Ltd, who at that time was growing frustrated with the limitations of the Standard engine, capable at best of some 85 horsepower or so. Lyons hired Heynes, placing him in the newly created role of chief engineer for the company. While Lyons may have envisaged improvements to the Standard engine, it fell to Heynes to convince him that an entirely in-house engine development programme was necessary. As WW2 came to an end, and the SS company renamed itself to Jaguar, the freedom from wartime material production allowed Heynes to design and produce the engine he had long desired to create.

The resulting engine was the legendary Jaguar XK straight-six, which debuted as the powerplant of the classic XK120 at the London Motor Show of 1949. Heynes also went on to direct the design on all Jaguar production cars of the period, including the magnificent C, D and E-types, and XK120, 140 and 150. It was Heynes' love of motor racing that drove him to persuade Lyons that Jaguar should enter Le Mans, resulting in a glorious series of victories in 1953, and 1955 through to 1957, that showed the world that Jaguar was a force to be reckoned with.

After 35 years of dedicated, inspired work, Heynes retired in 1969, having reached the heights of Vice-Chairman of Jaguar, and was made a Commander of the Most Excellent Order of the British Empire for his services.

It was Heynes that, in 1958, arranged to lend then Motor editor Christopher Jennings E1A. The rest is history. This re-run of the 1958 E1A test is therefore dedicated to the person who made it happen, and whose inspiration and dedication helped create the Jaguar that is so universally admired even today.

The organisers would like to thank the following businesses for their support of the event.