Great Carrera races
In its unmistakable squeaky green design with the number 58, the Lola T70 shoots over your Carrera racetrack at a scale of 1:24. The first variant was the Lola T70 Spyder. In 1966 the Lola T70 Mk II Spyder appeared, which was replaced by the Lola Mk III Spyder in 1967. John Surtees became world champion in the CanAm series on Lola in 1966, but only one race could be won against the McLaren M6A-Chevrolet in the following year. The first closed variant was the Lola Mk III Coupé, which appeared in 1967. It was replaced by the Mk IIIB Coupé, which appeared in 1969 and was only built until 1970. Like the original, the slot car has been reproduced in great detail and equipped with front, rear and brake lights. The car can be controlled digitally, but can also be used in analog mode and can also be individually coded.

Carrera Digital 1/24 benefits at a glance
Lane changes and overtaking at the touch of a button
Up to 4 vehicles on a track at the same time
Depending on the driver’s ability and skill, the speed can individually adjusted with up to 10 levels
Simple vehicle coding using the manual control unit
Perfect sliding and drifting
Predominantly with front and rear lighting
Vehicles can be used on EXCLUSIVE (analogue) 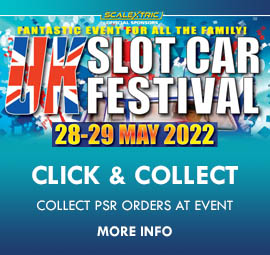