The Slot Car Frenzy of the '60s - Beginning to End.

Featuring the people, the products, and the events as they unfolded in the hobby’s “Classic Era”.

Philippe de Lespinay lived in Spain and France in his younger days, and in California since 1970. He became involved with slot cars in 1966, when working as a plastic model kit designer for the French Heller company. He embraced the new hobby while also racing motorcycles. Once in the USA, Philippe worked for a consulting company where he developed the first "magnet traction" slot car, this in the HO scale.

He became a professional slot car racer, making a living from building chassis, motors and complete cars for serious "open-class" racing, while developing advanced bodies with Lloyd Asbury of Lancer fame. He nearly won the US Nationals in 1973, and was hired by Cox Hobbies to redesign their slot car system that they inherited from Eldon. There, he designed and engineered the first production slot car in the world using a separate traction magnet.

He began racing motorcycles again quite successfully, building his own machines, then designed and built an advanced Grand Prix motorcycle for the Italian Morbidelli company, driven by Valentino Rossi's father in the 1979 racing season.

In 1978, he switched to racing cars and still does to this day, restoring several important and significant racing cars in the process. He owns a 1972 Dan Gurney Eagle-Offenhauser turbo of which he designed the iconic paint scheme, that was the most successful car in period with the British McLaren, and now drives it in high-speed exhibitions on various racing tracks in the United States.

In 1982, Philippe founded a company that manufactured modular racing wheels and imported drivers’ racing equipment from France, and retired from it in 1995. He started Electric Dreams which sold modern slot cars made in Spain and China. In 2007, he sold the company to a passionate gentleman in Los Angeles, and helped him to acquire and display the finest collection of vintage slot cars in the world. In 1998, Philippe wrote a first book about vintage slot cars that sold out. His new book is likely the final word on the “Classic Era” of slot cars in America, with far more and up to date information and with a series of interactive, dynamic web links that are found in the pages, more than doubling its content.

Secure this item by online pre-order.

We do not charge for pre-order items until the product becomes available and is ready to be dispatched, this is especially useful when a product is anticipated to be popular and could sell out in a short time once released.

Please note that release dates can change due to changes in manufacturing and shipping schedules. Colour and contents of products may vary from those illustrated. 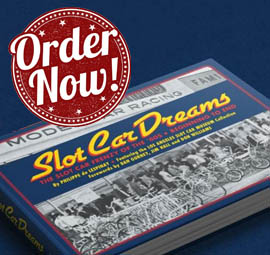