At Pendle Slot Racing we are pleased to announce a new addition to our range of PCS 1/32 Slot Car Kits. The Ford Escort Mk3 RS Turbo S1. This third generation of the Ford Escort was made between 1980 to 1986 with the RS Turbo S1 produced from 1984 to 1986. 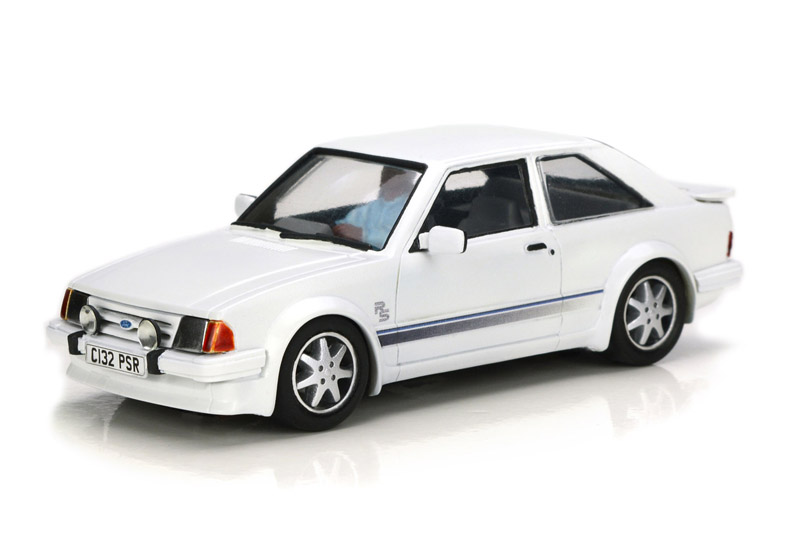 The Ford Escort RS Turbo is a 3-door Ford Escort Saloon and was only available to order in Diamond White, except for a very few one offs including the mythical black car owned by Princess Diana.

The RS Turbo is given a distinctive sporty appearance by it's unique body coloured front grill, bumpers, skirts and spoilers. The deep front spoiler contours are continued around the car with front and rear wheel arch spoilers and interconnecting sill extensions. On the tailgate an XR3i spoiler (also body coloured) is fitted together with a RS Turbo decal. RS Decals are fitted to the front wings immediately above a graduated, wide bodyside stripe. The Interior is trimmed in a combination of Monza and Cashmere fabrics and XR3i type 'Recaro' LS bucket seats were fitted as standard.

The RS Turbo was introduced in 1984 to homologate Ford's Escort for the 'Royal Mail Datapost' entry into the British Touring Car Championship. 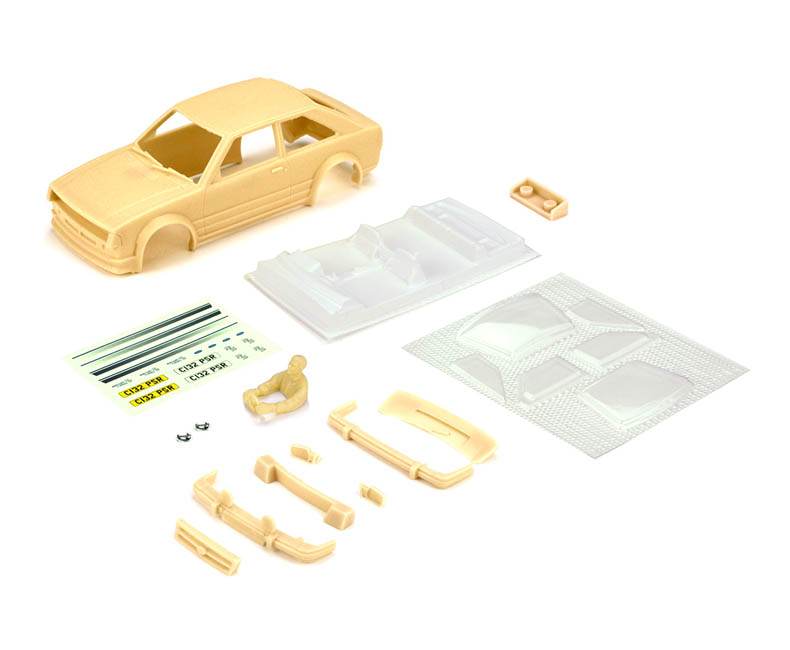 Body Kit and all the parts to assemble into a complete slot car.

Below are photos of our finished example of the kit assembled and painted... 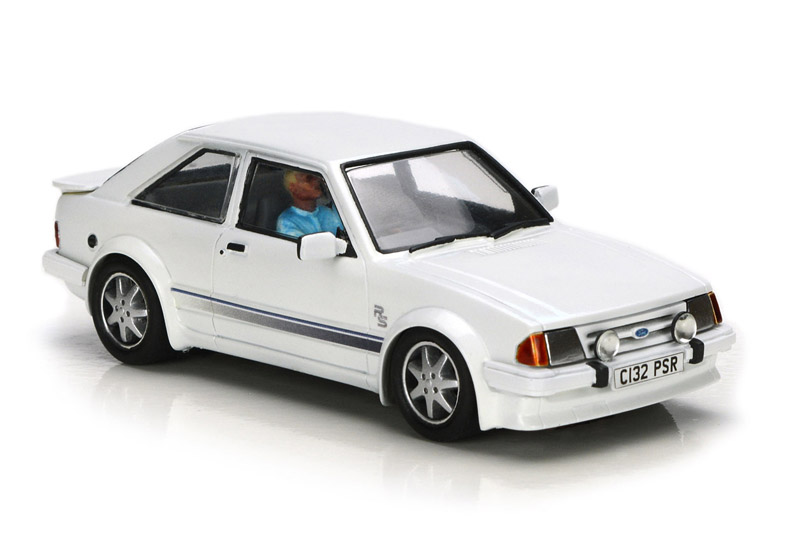 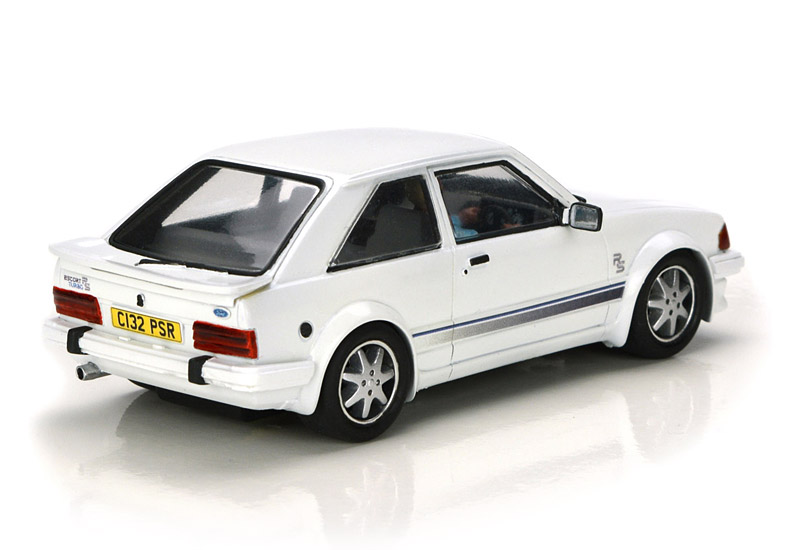 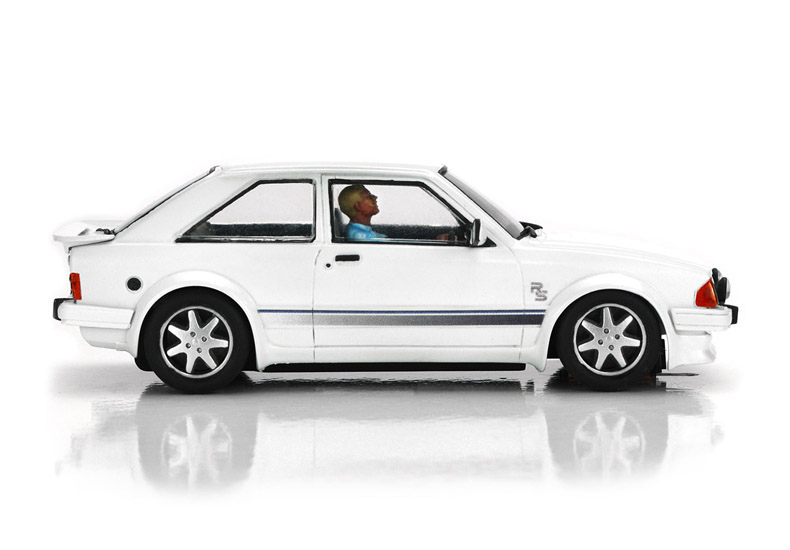 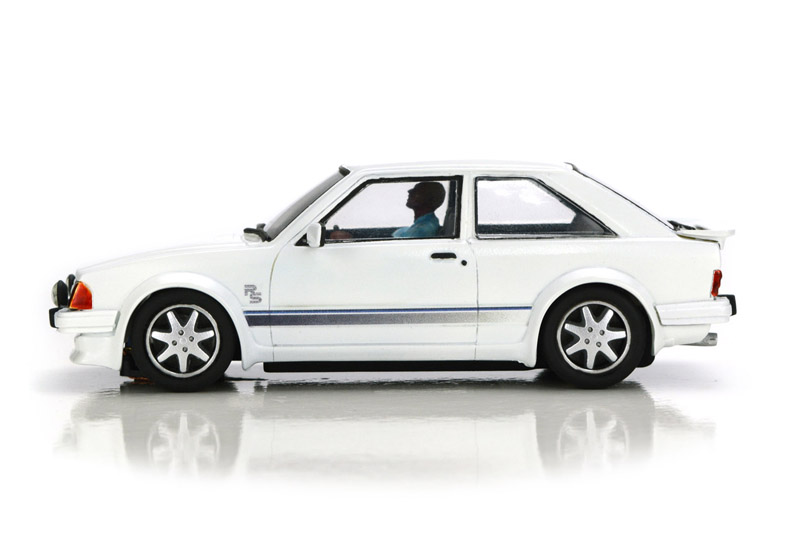 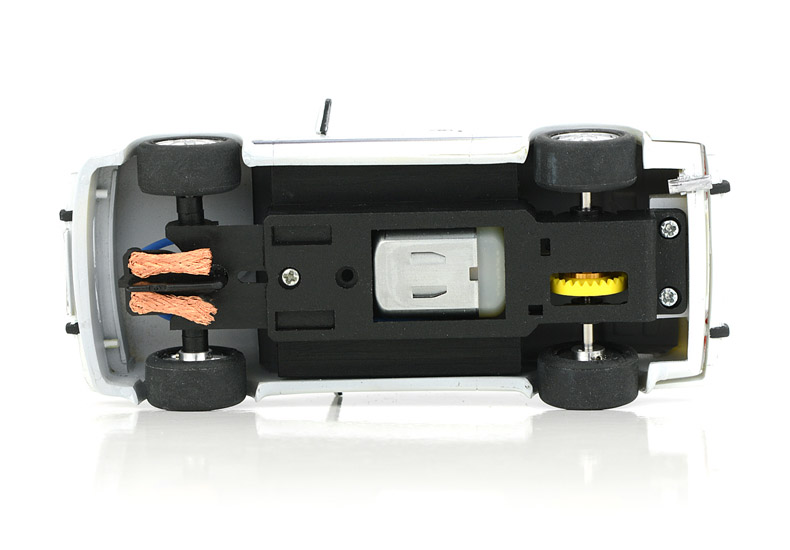 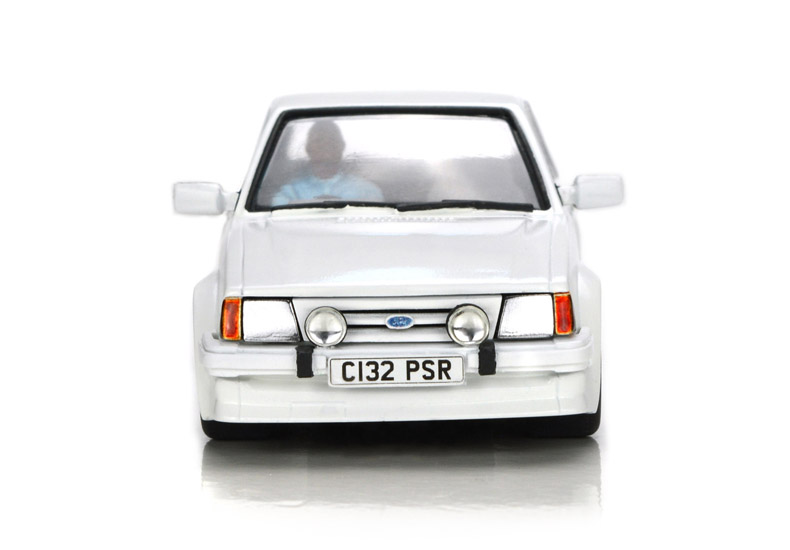 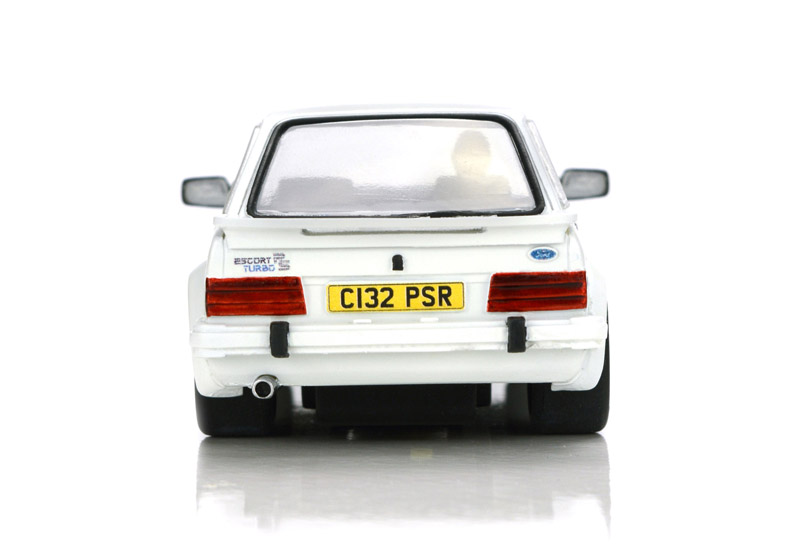 I’ve always been a bit of a Ford fan. Growing up as a ‘boy racer’ at a time when MK2 Escorts were 10 a penny. I spent many happy hours scouring scrap yards for parts from 1600 Sport and Ghia models to trim out my old 1100 Popular!
The ultimate was when we shoe horned a 2lt Pinto engine & gear box from a scrap Ford Cortina into another old Mk2 Escort. It gave many newer cars a run for their money!

As time went on I spent a good few years working in the bodyshop of a Ford main dealer. Performance Fords were more in reach, mainly because we could purchase trade ins at book price. A long line of cars followed. Fiesta MK1 XR2, Fiesta MK2 XR2, Ford Escort MK4 XR3i, Ford Sierra XR4x4 and ultimately a Ford Sierra Cosworth Sapphire 2WD were just a few.

One car which always eluded me was the Escort RS Turbo Series 1. So I got thinking, lets make one. We’ve done it before, we have a Mazda MX5 and Sierra Cosworth in our resin bodies range both inspired from previously owned car.
Scalextric made a Ford Escort XR3i back in the day so theres a start. Or so I thought!

The making and development of the PCS Ford Escort MK3 RS Turbo S1...

Looking at the old Scalextric Ford Escort XR3i car I sized it up and checked it for scale, it is actually surprisingly pretty accurate, less than 1mm narrow and less than 1mm long.  Good start. Then it all goes a bit wrong. It may have been easier to carve one from scratch. We ended up remodelling virtually everything on the original Scalextric body.

Rear end - the tailgate was too shallow, resulting in the rear lamps being too high, the rear bumper too thin, rear lights too short, rear spoiler just wrong! 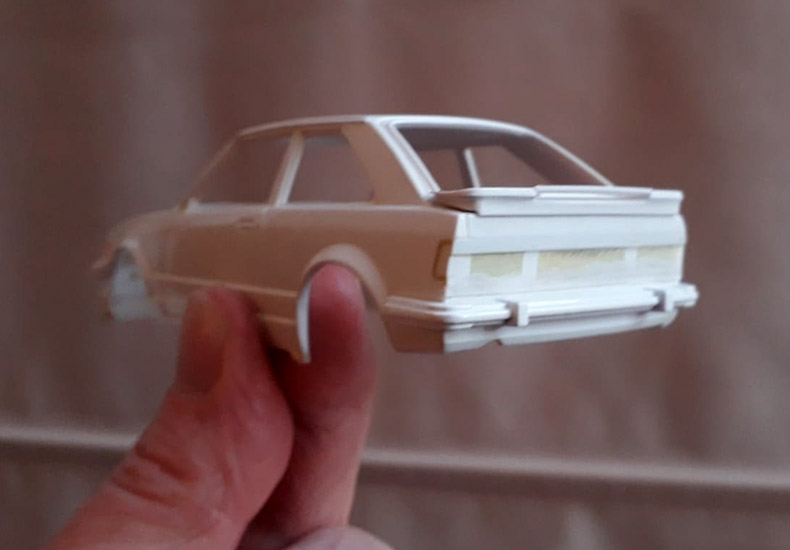 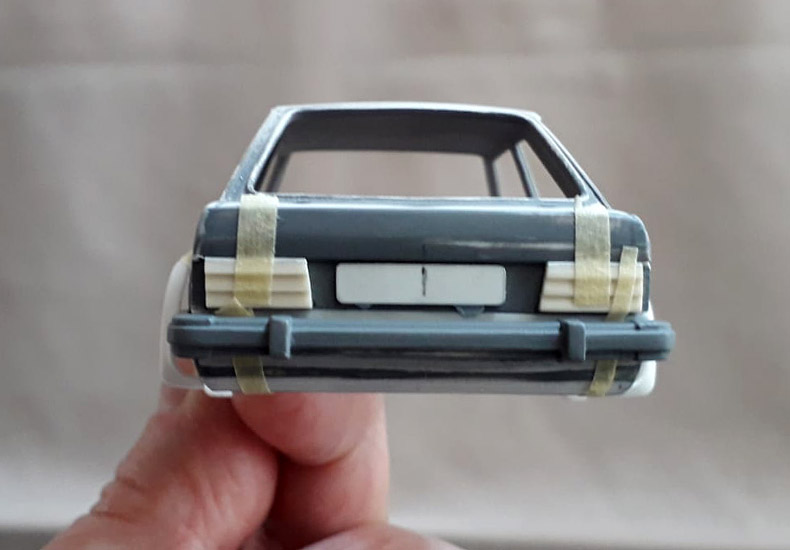 New door mirrors were carved which reflect the actual shape nicely and the rear quarter window has been vac formed so you can fit it to the outside of the shell, much like the real car. 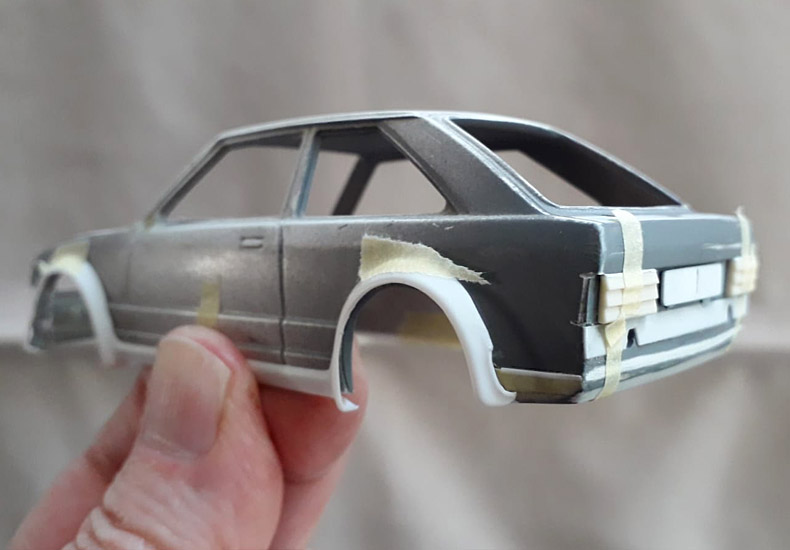 Then we had to work out how to create the wheel arch covers, luckily we have our own vac form machine so a donor bodyshell was used, we cut the sides off the shell to create a buck and vac-formed over it then very carefully cut out the arches and glued them to the new shell. 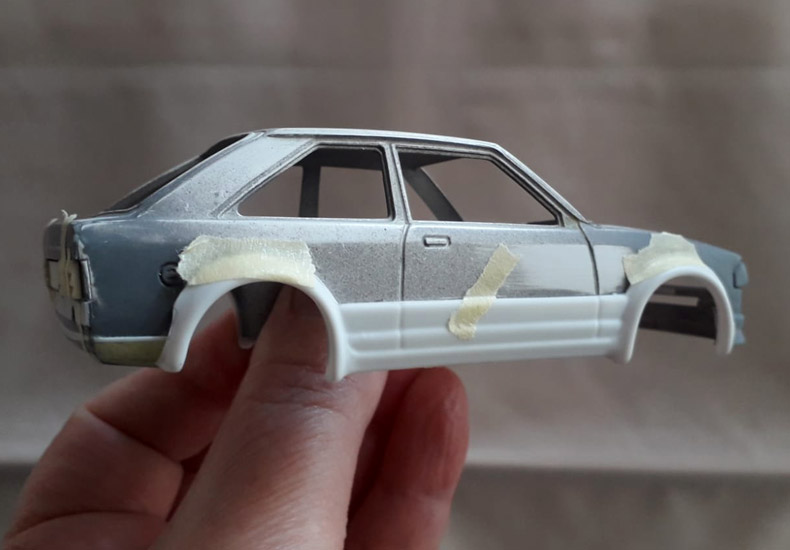 These were then re-shaped and blended into the new front splitter. 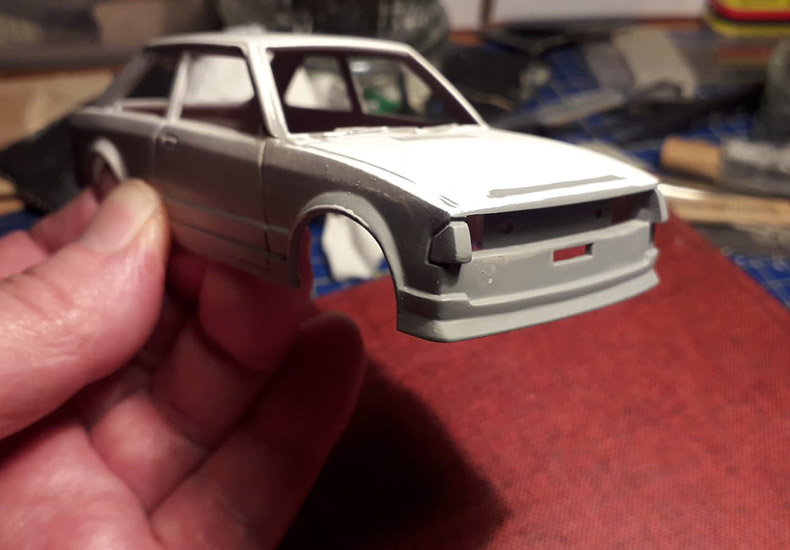 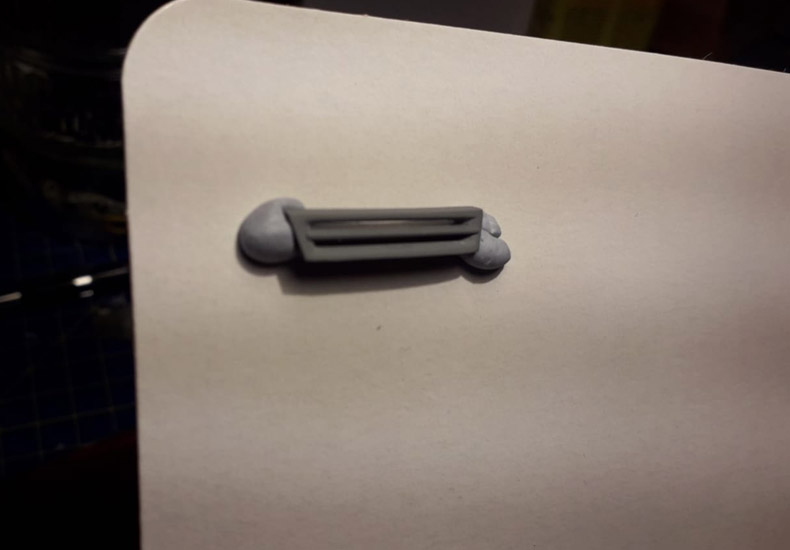 Even the wheel inserts were made from scratch – with the help of a 3D printer, we had a rough shape which we then made resin copy, from which we could sand and shape more easily till we achieved the desired shape.

The interior, albeit a vac form is a copy of the actual RS turbo interior and dash.

Finally when the body was made we set about designing the striping kit. 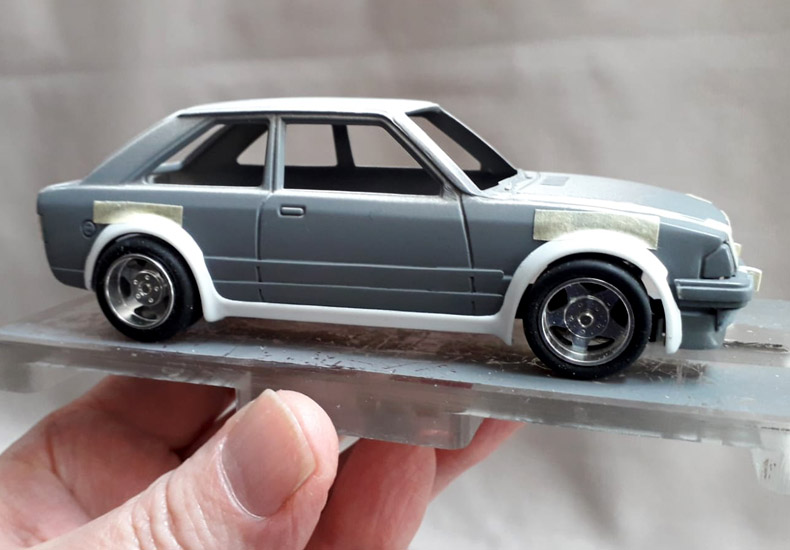 Overall I’m very happy with the results. I dread to think how many hours we have spent on this one project but at the end of the day we have created something that I’m proud of. 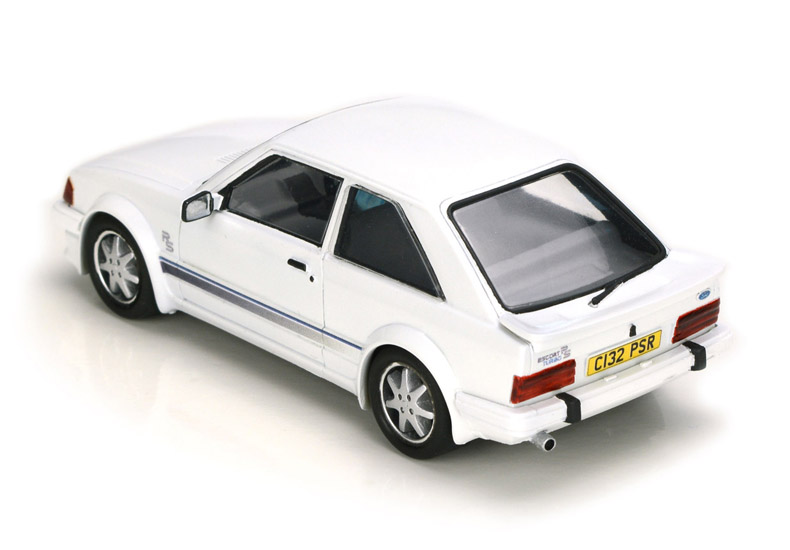 Comparison to the Scalextric body... 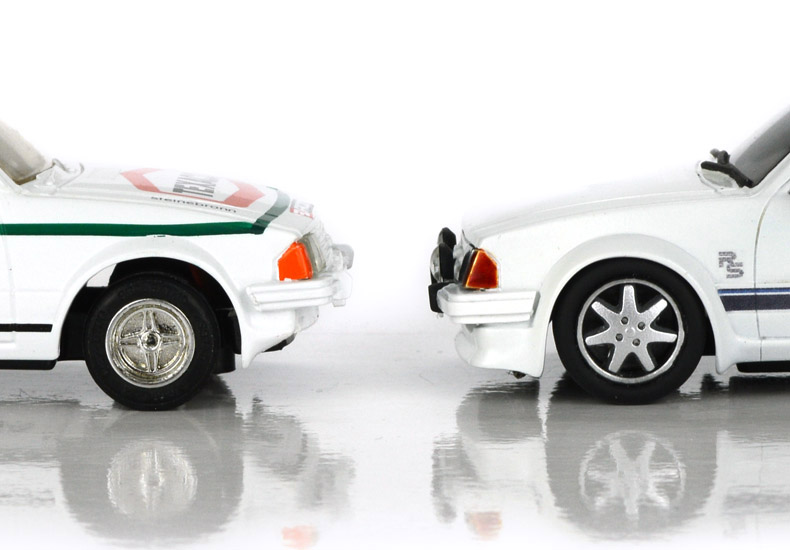 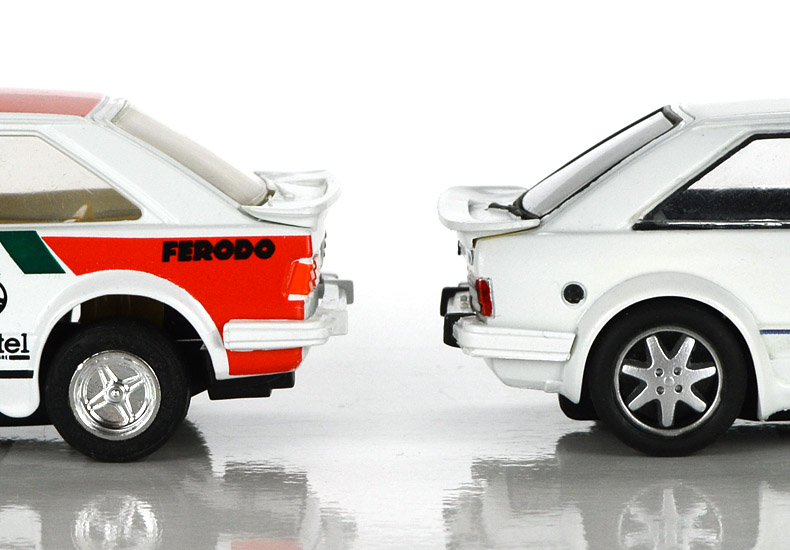 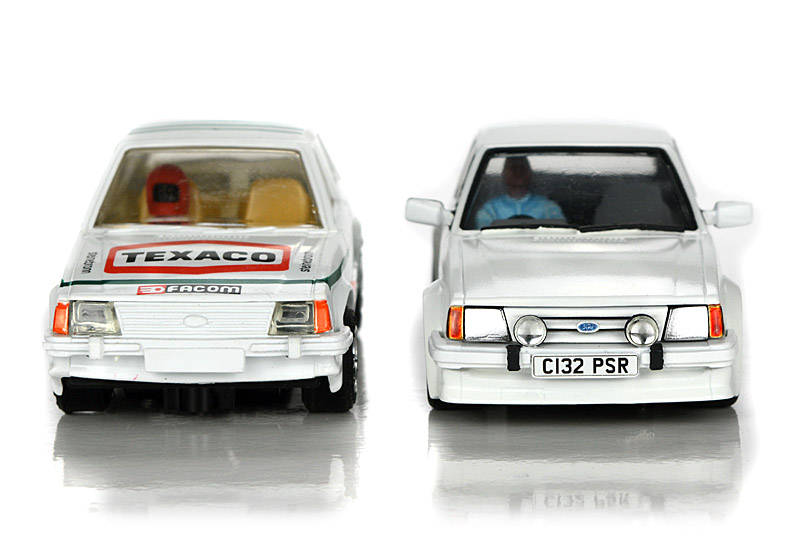 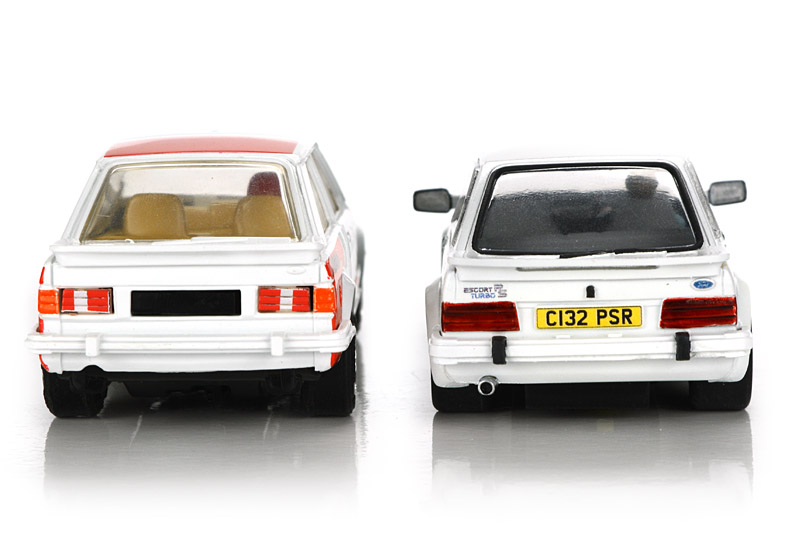